Still now, I can´t really believe what I was able to experience last Weekend. What a Rally! 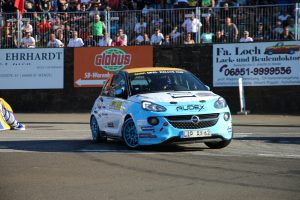 Starting with the Recce with over 1000 driven Kilometers, driving the beautiful but also very challenging Stages of Rally Germany this year.

The real start of the rally was the ceremonial start in the City of St. Wendel. It was an incredible atmosphere. Then we drove the City Stage in St. Wendel right before the Top WRC Drivers like Neuville, Ogier, Latvala, … That was a really great experience for me too. We managed to drive the 10th fastest time in the Opel Cup, which gave us a really good Feeling for the next day. 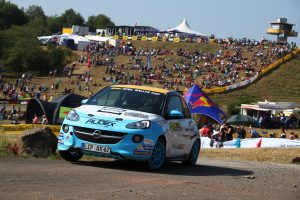 In the evening Jeannette and I were going through the stages again with the Recce Videos. To be well prepared for Friday.

Friday started quite bad for us. In the first morning stage, we were surprised by quite a bit of rain, what led us in to a ditch. Luckily there were some finnish Rally Fans. They did a great Job pulling and pushing us out of the ditch. After that we Need to Change our front right tire, because the rim was stuck behind the Brake Caliper. We lost quite a bit of time there, but we were able to continue. So we drove the car safe to the finish and started fresh on Saturday.

Saturday was a really challenging day, due to the 40km Long Panzerplatte Stage. It was an incredible Feeling to drive the stage. In the first Loop we got three punctures, which was a Thing we didn´t want to experience on that stage. We lost around 6 minutes. But we were able to drive the car to the Tyre Fitting Zone, to get some new tyres. In the second Loop we got through without any punctures but we Need to reverse one time on the stage. It was a great Feeling in the car when we passed the finish line. And it was a 11th time Overall, so not bad 🙂 . I got an amazing Feeling in the car for the next stages, so I was able to drive a 10th time Overall in the last Stage for the day. This stage was also the stage were my teammate Sean drove his first ever Stage win in the Opel Cup, congrats!! 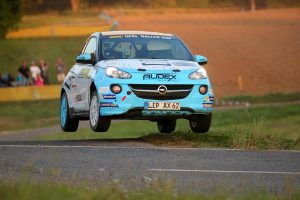 On Sunday we should drive two stages, but the first one was cancelled due to an accident. So there was one Stage left for the Rally. We just wanted to clear the stage without any mistakes. And it worked, we reached the finish line with an amazing result for us. 11th Overall in the Opel Cup. All of us Audex Drivers reached the finish. Elias won the Rally and Sean finished 6th after some electrical Problems. A great result for the Team.

I made quite some Progress on this Weekend, a big part of it was my codriver Jeannette. She showed me some tricks and gave me some exercises to Train my concentration. Big thanks to her 🙂

My Service Team didn´t had an easy Job with me that Weekend, but the kept the wheels turning. I´m really thankful for their help and Support. You Guys are really amazing!!!

Thanks to everybody i´ve met and who supported me during the Weekend. Hope to see you all again.

Also big thanks to everyone who made it possible to drive this Event.

Sorry, the comment form is closed at this time.